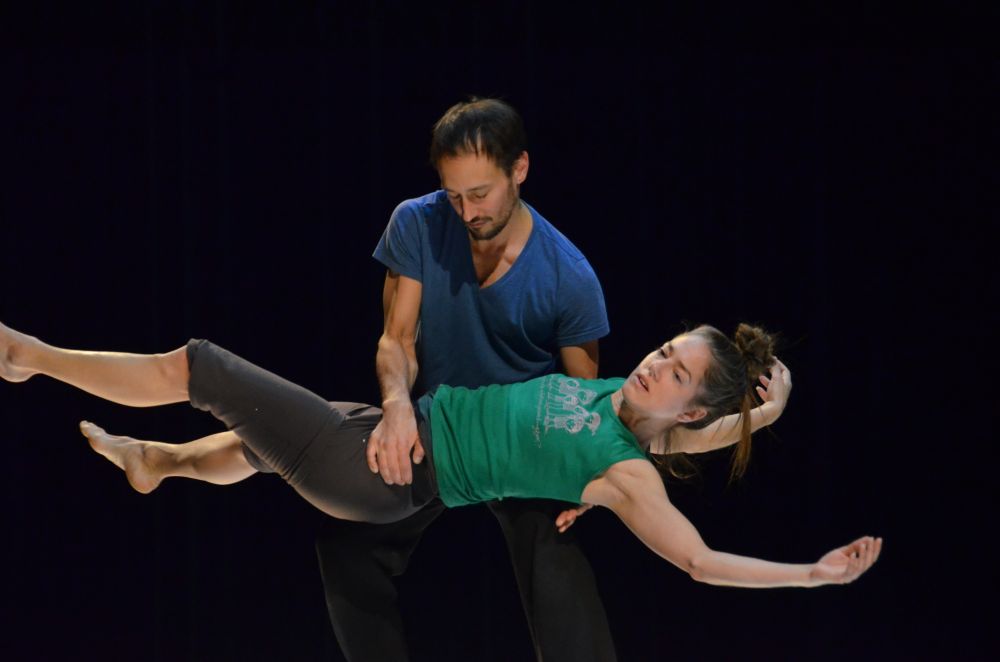 Trio 2017 (temporary title) is a piece in creation choreographed by Manuel Roque and performed by Sophie Corriveau, Lucie Vigneault, and Manuel Roque.

The research process that is starting at fabrik Potsdam, focuses on the interaction between site-specific space and human dancing body. After putting a dancing body in the dark through the piece « Black Matter » developed during the project Migrant Bodies, Manu pursues his reflexion on the connexion between our inner landscapes and our environment, in a small or large scale. Deeply concerned by notions like climate change, the evolution of humanity, kinesthésic existentialism, the process revolves around the questions of adaptability, resilience, and perception of reality. Right now, the works find also some inspiration in the strings theory (Physical Science) and Plato’s « allegory of the cavern »and try to develop new ways of sharing and witnessing physical states of being.

The final piece will be presented during spring 2017, another 2 weeks residency will take place at Les Subsistances in Lyon in January 2016.

Aside to an exciting and diverse career as a performer for dance companies such as Marie Chouinard, Dominique Porte, Peter James, Sylvain Émard Danse, Fortier Danse-Création, and Daniel Léveillé, Manuel Roque is also choreographer.

In 2013, he founded the company Manuel Roque and presented in January 2014 the project In Situ at the Place des Arts square in Montréal. His new creation, the solo Data, has been presented at Usine C during the fall of 2014, and questions the notion of identity and the mater mutation through a formal and hyper-physical performance. During 2014-2015 season, Manuel is participating to “Migrant Bodies”, an international research project involving Canada, Italie, France, and Croatia and supported by the European Council. He creates Black Matter that is presented as part of the Migrant Bodies shows in the four countries and will be also in Dublin in December 2015.

His next Creation, 4-OR will premiere in Montreal in December 2015, presented by Tangente. In 2015, he benefits from a two months creative residency at fabrik Potsdam, thanks to the financial support from CALQ (August -October 2015). The same year, he is also nominated “Bearer of Hope” in the annual selection of the prestigious “Tanz” magazine.

Lucie completed a dance formation at Université du Québec à Montréal (UQAM) with two baccalauréats, one in 2001 as a dancer and one in 2008 as a teacher. For 10 years, she has been involved in different projects as a dancer, teacher, choreographer or artistic adviser. Among them, she danced for Johanne Madore and Alain Francoeur (with Cirque Eloïze), for Roger Sinha, Hélène Langevin, Tony Chong, Peter James, Frédérick Gravel, Danièle Desnoyer, Manuel Roque, Stéphane Gladyszewski and Daniel Léveillé. Between 2009 and 2014 she is also a dancer for Cie Marie Chouinard. In 2003 she received a Gemini award for her astonishing performance in Cirque Orchestra from Cirque Eloïze. In 2014, she is part of the international tour of Joe by Jean Pierre Perrault. This year, she performed the solo Carte Postale de Chimère from Louise Bédart, which is an important piece in the Quebecois contemporary dance repertory.


STUDIO QUÉBEC is a Residency program taking place in Germany and Québec enabling the exchange of choreographers. Canadian and German artists are each year invited to a working time of several weeks in the other country. STUDIO QUÉBEC is a cooperation by fabrik Potsdam, Conseil des Arts et des Lettres du Québec and Goethe-Institut Montréal.